PRODUCTION MANAGEMENT IN REAL TIME WITHOUT SCHEDULING, WITHOUT DIRECT SUPERVISORS

TIME FOR A BREAKTHROUGH

Organization of production in modern factories is a complex process involving a team of people responsible for technology, planning and supervision, supported by various procedures and tools. Production is usually based on a schedule created by planners, which is then implemented in the production halls. Each production plan is, by its definition, a simulation of the future based on a number of assumptions, among others, availability of resources in given time, normative times of technological operations, or delivery of required materials within the expected time frame. Each new, urgent order, change of the deadline or other deviation from the plan requires its change, i.e. the re-planning carried out by scheduling. Due to the high dynamics of changes in the basic planning parameters, the production managers, despite the support of modern ERP, APS and MES class systems, are constantly struggling with exceeded deadlines for orders and inefficiency in the form of incomplete use of employees' time caused by downtimes and micro-downtimes. Even the most modern scheduling tools are not able to convert a huge amount of data in a very short time, so planners must constantly choose between the accuracy and speed of work of these systems, which has a fundamental impact on the quality of planning and management. Such management model generates high fixed indirect costs resulting from the need to employ the necessary specialists in the area of planning and supervision. 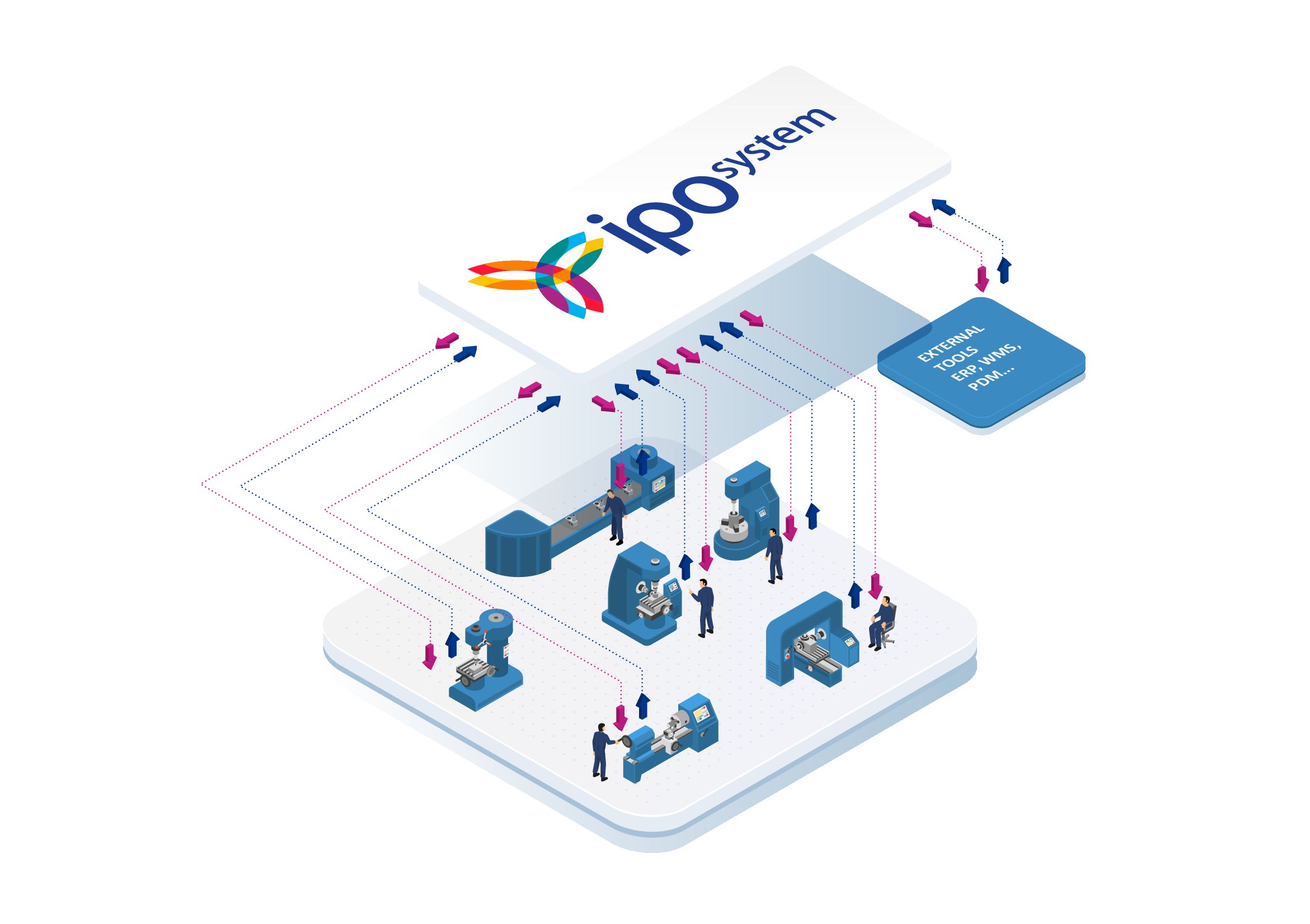 The solution to this problem is the implementation of a digital robot - based on narrow artificial intelligence, autonomous decision-making system that independently, without the participation of planners creating production schedules and direct supervision personel manages the work of employees and machines in production halls. IPOsystem makes optimal decisions regarding the order of implementation and selection of resources for individual technological activities in real time. Each employee, after reporting to the system, is immediately instructed to carry out the optimal technological operation at a given moment.

Employees may use various technologies to interact with the system: terminals, tablets, smartphones, machine controller displays, personal computers and in the near future augmented reality and voice commands. Through them, the IPOsystem communicates autonomously decisions and allows the introduction of additional reports and information. The system also enables the collection and use of data directly from machines and the independent control of machines and robots in processes carried out without human participation

Such system operation is possible only because the calculation of the release of subsequent works is optimized and implemented in real time, without scheduling!

IPOsystem is a key tool for digitizing production areas. The intelligent decision algorithms used in IPOsystem as well as innovative tools for tracking the current state of resources in production halls make the idea of autonomous, remotely managed factories become a reality.

The task of ERP, APS and MES systems is to provide information supporting decision making by people who decide on the order of execution and allocation of resources to individual technological operations.

The task of IPOsystem is autonomous decision making regarding the order of work and selection of resources for individual technological operations and independent control of available resources without participation of planners who create schedules and without direct managers on the production floor.

The role of ERP, APS and MES managers - quick and responsible operational decisions

The managers now focus on:

IPOsystem facilitates strategic planning processes and enables the improvement of enterprise activity efficiency within the scope of:

IPOsystem does not replace systems of the ERP (MRP) class but integrates them and operates along with them.

Due to the specifics of resource control (control of 100% of employees' work time), data on completed works and processes collected in IPOsystem are a reliable representation of reality.

The existing tools allow to control the working time of individual operations. For example, time spent on providing planning and organizational information is out of control. The problem of these systems is the lack of full, automatic external control over the working time of individual resources (which allows employees to perform or report individual operations not in accordance with their actual course - time and order of execution). Linking and automating planning processes with direct management of employees by IPOsystem results in obtaining reliable information on the real time of implementation of each technological operation.

Each employee receives the first work order automatically at the start of work on a shift and logging into the system (RCP function). Subsequent work order is issued to the employee at the end of the previous work (within a maximum of 5 seconds). The IPOsystem regularly controls the working time of all work in production halls and automatically, in real time, informs the production managers of any exceeding of the assumed working time and work performance with lower than assumed performance. At the same time, the system calculates the actual monthly performance of each employee / brigade and enables the comparison of work parameters of individual resources in any time range.